The current frenzy surrounding the Hamlet audio book release made me think of my first collective experience as a Richard Armitage fan: the Popcorn Taxi Q&A in Sydney, Australia. 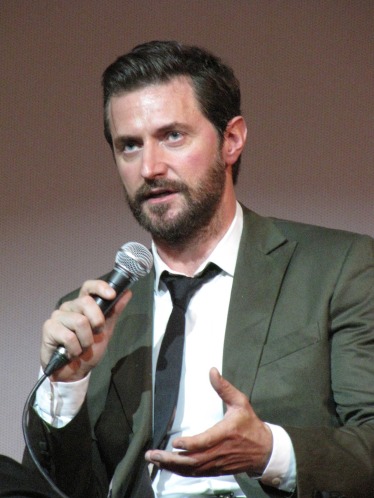 The build-up to the event, not to mention two very fortunate fans getting to share a studio camera with Richard earlier that morning, was fun to follow in real time. The question and answer session itself was informative and classy, while still appearing fun and light.

First of all, let’s just get this out of the way: Richard was looking fine that day. I could feel the charisma seeping out through the camera lens! The beard, and the clothes, and the…

okay, you have eyes, you can see.

Straight out of the gate we see sincerity when Richard is asked what he has personally taken away from portraying Thorin, and his answer is about leadership. I suspect he didn’t know he had it in him, so the experience really settled in and changed how he viewed himself. The reluctant leaders are often some of the best because they don’t get caught up in the role but focus on the action instead.

I found the mention of mask work interesting because I had never heard of it before; the simplicity of something that is one of an actor’s most important tools. That and the fact that I can now convince myself that I am merely a budding Thespian when I make faces in the mirror, instead of a self-involved doofus.

I found it humorous that Richard wanted credit for the Dwafs Illustrated 2012 calendar idea. I love those moments when we glimpse the subtle struggle of wanting attention, but not too much. We see it again when talk turns to the singing of The Misty Mountain song.

Richard, the perfectionist, threw himself into making that performance the best that it could be with his in-depth research and dedicated voice work. Mr. Consummate Professional may say that his solo didn’t belong in the end credits, but you can see that a big part of him really did want it there.

Then there’s talk of character development, staying in character, and that same old song and dance about Richard’s face being meant for darkness.

Bennedict Cumberbatch is mentioned and suddenly we’re at a sporting event. No matter because I soon become distracted by the insinuation that Thorin and Smaug were initially not going to confront each other. This always fascinates me, learning about the parts that were added in pick-ups, because sometimes they are really significant.

And then, of course, we end with the swoon worthy bit

I always thoroughly enjoy this interview. It’s the perfect mix of professional insight and casual conversation. I think we’re ignoring the elephant in the room though:

What is a Popcorn Taxi?

A cart full of popcorn, a circus car, a marketing ploy ahead of it’s time? Alas, this particular mystery of the universe will have to wait… because I’m off to make some popcorn.

7 thoughts on “A Perfect Mix”