the muse seems to have awoken from his slumber for a bit. I’m going to save the analyzing for later and just enjoy it; I’ve missed him.

1.) What was your first impression of me?

2.) What is your idea of a truly romantic evening with me?

when we start out slow dancing to romantic music, but end with you… being you.

3.) Something that you’d like to change in me but don’t have the nerve to tell me

4.) Which 3 parts of my body are your favorites, and why?

your tummy, because I have a thing for your navel

your arms, because I have a thing for your biceps

and your gun, just because

5.) 3 qualities that attracted you when we first met, or once you got to know me

song: Same Old Me and You because, there’s just something about that guy who sings it!

7.) Fruit or vegetable I resemble, and why

8.) Our first date, where did it take place and what did we do?

we were on opposing teams of a Paintball war. I get a little crazed playing wargames. I like to taunt my victims, I mean opponents, before shooting them. you said you liked the wild look in my eyes, it intrigued you. well, first it terrified you, then it intrigued you. we started dating a week later, after you recovered.

10.) What was on your mind the last time we were intimate?

11.) What was the first thing we said to one another?

big words for someone who was cowering at my feet. so cute!!

how well you take orders

I had a dream last night that I lived in a run down little town out in the middle of nowhere. I had just stepped inside the dingy and dark carryout to get a carton of eggs. a local police officer met me just inside the door and I told him what I was there for. behind him the front of the store was draped in sheets of plastic and a female in a pristine white lab coat was typing away on a computer. the officer said I had to wait my turn because someone was still in the back where the food was. that part of the store couldn’t be seen, it was all boarded up. suddenly a man came running out of the door yelling “it moved! one of them moved!” as the door swung shut I caught a glimpse of a dismembered, bloody leg laying on one of the food shelves.

the officer laughed at the man and told him to calm down; it wasn’t even noon yet, they wouldn’t be moving. the man was having none of it, and fled the store. I was up next and tried to plead with the officer to go for me, or at least go with me. he was more sympathetic with me than with the man who had just left but told me that wasn’t the deal: the food was free as long as we took the risk to get it ourselves. I hesitated and looked toward the lab assistant who had stopped typing and was watching me. did I really need eggs this badly? the next town with a store was 30 miles away and I had no car. I would have to make arrangements to have someone drive me, which would cost money

here, I could hold out until I absolutely needed something and then walk to the store and get it for free, as long as the food lasted. the shelves were pretty sparse so I knew I’d have to figure out something soon regardless. I gathered up my courage

and walked through the door. my strategy was to move straight to what I needed, eyes ahead, grab it and leave. I spotted the freezer at the back of the room through the dusty light that was seeping in from the cracks in the boarded up window. I moved towards it quickly and grabbed the carton of eggs; I noticed that it was the last one. I checked the expiration date, trying to calculate how old they actually were and if it would still be okay to use them, when I heard a shuffling sound behind me. 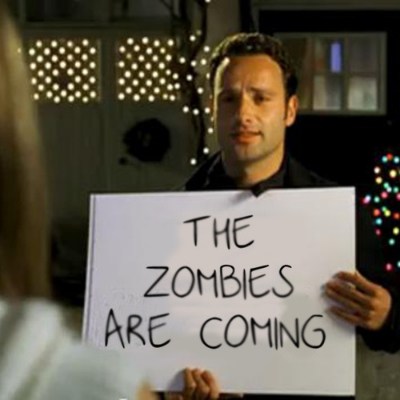 slowly I turned around and saw two bloody zombies moving towards the door I had just come through. then I saw a third right beside me, starring at me curiously with it’s jaw missing,

I dropped the carton of eggs…and woke up.

and that was the dream I had after only watching a commercial for the Walking Dead, do you see why I don’t watch it?!

p.s. I usually don’t eat eggs but today after church the boy scouts were making omelets. curiously I was really craving one…