I avoided watching North & South for the longest time.

It seemed like just another Mr. Darcy-Pride & Prejudice deal to me.

I liked Pride & Prejudice, but I just wasn’t up for that kind of frustrating delayed gratification at the moment. Plus, I was pretty sure Margaret would get on my last nerve, with her strong-mindedness and prejudice towards the working class northerners.

Finally one evening after watching Vicar of Dibley with some internet friends in a chat session, we decided to tackle North & South the following night.

I cheated a bit though, finding the kissing scene on youtube the next day

and watching it too many times to count.

I was pleasantly surprised with North & South.

For starters, I didn’t hate Margaret.

Her decisions annoyed me but she was quite likable, all things considered.

And then there was Mr. Thornton.

There was nothing about the quiet, resolute and respectable mill owner that I did not like.

I understood John’s way of thinking and his reactions to the world around him.

Margaret on the other hand…

but I was constantly shaking my head at her,

especially in regards to her well-meaning yet mildly offensive charity endeavors.

But after finally watching North & South

It wasn’t hard to understand what all the swooning was about!

A: but Mother, I daren’t believe such a woman could care for me

That whole scene melts me! John believes, for propriety’s sake, that he must propose marriage to Margaret. He truly cares for her but knows she only sees him as a brutish mill master and an unrefined northerner. John’s mother fills his head with hope though, and you see his spirits rise to the possibility. The missing cravat, the open and vulnerable countenance, that sigh…

the rejection. the feels! 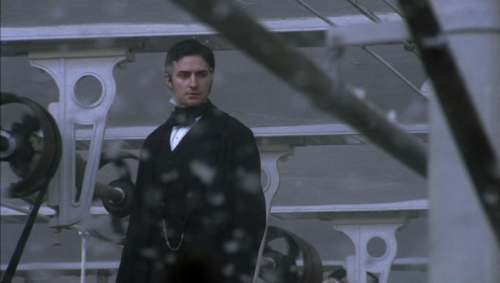 This is Mr. Social-Call Thornton. I’m not crazy about top-hats but look at that poise: 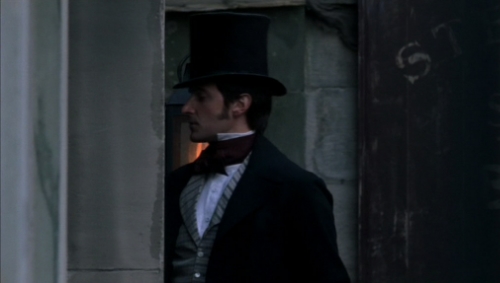 Notice the splash of color here: a maroon colored cravat and a stripped waist-coat…

But here we have I’m-running-my-own-business-and-life-is-good Thornton:

While here we have my-mother-just-gave-me-some-really-bad- advice Thornton:

dashing but not as appealing, somehow.

if he would have just gone with this look to begin with:

Oh, no! Poor Mr. Thornton has gone from dashing to distressed. 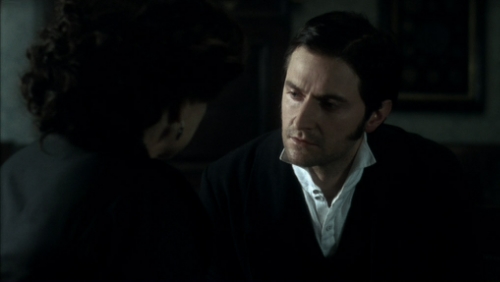 where did he go wrong?

Was it the hat? It is a bit frayed. 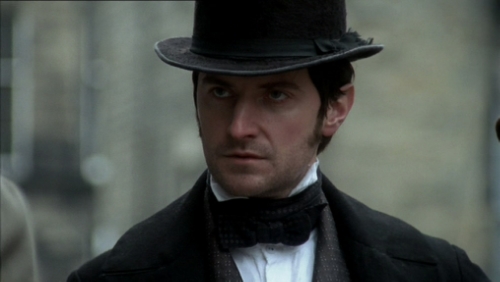 Was it the splash of color? 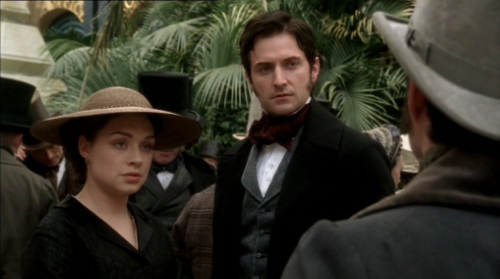 Was it the stripped waist-coat?

aside from the unwanted attention, it wasn’t the waist-coat either.

What was it, then? Maybe show more of those forearms?

*tries not to shrink from that intimidating stare*

Once I had made the decision to find out more about this Richard Armitage fellow and looked up his mini-bio and list of film works on IMDb, I turned to Google. First, to figure out how the heck to pronounce Leicester, then to find a decent fan-site that would hopefully tell me the kinds of things I wanted to know.

I clicked on RichardArmitageNet and was hit full force with loads of helpful information!

Photo galleries, Print and Video archives, Audio extracts and downloads, Previews of his film work; OH MY! I’m a visual person (shocking, I know! ) so my first stop was the Photo Gallery. I skipped over the individual film projects, since I had no idea what any of them were yet, and focused on the Photoshoots.

As I browsed, I found some that have become lasting favorites

While others, I would just have to come around to.

(Edit: RAnet no longer has the extensive PhotoShoot Gallery it once did)

Next I moved on to the Print archives. This is my favorite way to become familiar with an actor. You can watch them grow and progress as a person, and track their career as it unfolds before them. I found an interview from the North & South era, that fit what I was looking for. It told me he was Modest. It told me he was Polite.

It told me he was Self-Depreciating, Considerate, Solitary, Introspective, Valued his Roots, and Always wanted to Put his Best Foot Forward.

To say I was intrigued by this point was an understatement. I then hunted down a few Video interviews. Instantly I latched on to this one:

I admired his poise and focus, and the way he seemed to sift through his mind to find the answer he was searching for and showing us clearly the moment he had found it. When he gave the little quip about practicing his horse riding skills with the action figure, I knew I was hooked! An unassuming dry sense of humor will win a place in my heart every time.

This North & South video interview was next:

When Richard talked about his research, and the importance of costumes and their biographies, it became clear to me that he shared my passion for giving good stories the respect they deserve.

Then came CBeebies. He reads bedtime stories to kids?!

This endeared him to me straight away. I then moved on to the Audio section.

I picked A War Less Ordinary. When I heard Code Poem for the French Resistance, I wept real tears. So Beautiful. The poem, his enunciation, the VOICE! It wasn’t a superficial physical reaction I was having towards Richard Armitage; I was learning him from the inside out.

The chase had officially begun.