E.) Which of RA’s audio chARacters do you think he should play in a film adaptation?

I’m going to skip this question because I’m not a fan of audio books. I liked A Convenient Marriage, Venetia was okay, Lords of The North put me to sleep, and I quit Hamlet 20 minutes in.

F.) Name a play that you wish RA would do.

I’m not a big theatre goer. not that I don’t like plays, I do, I just haven’t had the opportunity to see many. my grand total is 8, most of which were musicals.

G.) How long have you been in the fandom, and how has your attitude to the fandom changed during that time?

The answer to this one is so long winded, it makes up for skipping the previous two!

I started lurking in this fandom in January of 2013, before starting this blog 4 months later. I announced my decision to stop blogging about Richard Armitage in late August of 2016- only to go against that decision and create a temporary blog to work through my confusion. I deleted that blog and moved those posts to my Getting Caught Up In The Mechanism blog, where I now blog about actors and fandom (Richard included). even after I stopped blogging about Richard here, I still kept a toe or two in the fandom by continuing to lurk in a few places. so I’ve been a part of this fandom for 5 years, a ‘superfan’ for 3. truthfully, I started wavering during year two but something kept pulling me back in.

In the beginning, fandom was a dream come true for me because talk centered around one subject above all others and pretty much stuck to that subject throughout. I’ve gotten to know many of you through discussing Richard. sharing our experiences in relation to storylines, character traits, aesthetic preferences, etc. this is how my brain works, I learn through story telling. give me a text book and I will fall asleep after page 2 but give me a movie/book/song that is fiction-based-on-fact, and I will eat it up in record time. I had been a member of 2 small groups in 2 different fandoms before this one, so I just assumed I would do the same within the RA blogging community as well. except the community reached farther than I thought it did. there were more blogs to read and comment on, more content to catch up on, more opportunities to interact with other fans…more frustration when the community became distracted by personal issues, opinions, and opposing methods of dealing with conflict. I didn’t sign up for that. I had a lot of positive experiences within the fandom too but the negativity seemed to dim their light. I am highly sensitive to underlying tension. some fans are able to shake that stuff off, ignore it if it doesn’t touch them directly; I am not one of those fans. I feel it in every wink and eye roll. I try to escape it by finding greener pastures, only to step into it again.

All of this was a constant push and pull to me, then Richard jumped into fandom himself, affecting a significant part of my fandom experience. I struggled with how big of a part that was. fandom was fandom and Richard was Richard and never the two shall meet. when they did meet? I cannot put into words how much that confused me and threw me off kilter. I could no longer separate Richard from fandom. when I finally came to terms with it all, observing from the outside instead of participating from the inside, the good memories overshadowed the bad and I was able to let the bitterness go. but that part of me that was damaged by not being able to separate Richard from his fandom never recovered.

I have such happy memories of my interactions on this blog. the silly captions and all those reaction gifs, the sometimes deep and sometimes shallow but always enjoyable discussions in the comment section, the familiar avatars of my readers and the warm feeling I get when I still see them on Twitter. it’s easier to let the hurt go now that my fangirl heart has fallen for someone else. I don’t regret this blog, I don’t regret the fandom friends I made, I don’t regret falling for Richard. it’s shaped me and helped me grow as a person in ways I didn’t anticipate but greatly value.

and since I live my life in song lyrics, I have a playlist for all of this. it starts with how fandom first felt for me in the beginning as I fell for Richard, moving into the yo-yo of emotions I went through as my feelings for both the fandom and Richard changed. then it touches upon the reluctance I felt when I left and my eyes became focused on someone new, ending with how I opened myself up to a new crush and let myself be happy again. some of these songs were part of my original RA playlist, while the others I turned to often as a reflection of my mood(s).

B.) Which of his chaRActers do you think RA is most like? which is he most unlike?

I’m going to go in another direction here, because I have a hard time using Richard’s film characters to answer this question. I find a little bit of him in every character he plays.

I think that Richard (and most actors) have personas that they adopt when doing press and promos. not that they’re pretending, necessarily, but that they play up certain parts of themselves in order to get the job done.

Unfortunately, I think that the Twitter Richard persona is probably the closest to who he is behind closed doors. I say ‘unfortunately’ because I have issues with his approach to using Twitter.

Case in point: the recent brouhaha where an entertainment critic used Richard for her own gain, banking on the fact that his fans would come out of the woodwork to defend him. instead of passing on by, Richard chose to reply to her remarks. I understand the urge to confront a remark like that, truly I do (I’ve given in to it myself a time or seven) but in my opinion, Richard responding to baiting like that shoots his cyberbullying ambassadorship all to hell.

And then there’s the constant self correction. I’m a fan of Richard Armitage, I happen to think he’s pretty swell and so do a lot of other fans, many of whom follow his example in everything that he does. so when he apologizes for being himself, that’s not a lesson I want others to replicate. if you regret saying off the cuff things publicly, then curb that habit of saying them. if you constantly find yourself removing tweets because you regret that you posted them, think long and hard about what you decide to tweet in the future.

Or if you’re like me and remove things because you can’t stand your own grammar mistakes, then petition Twitter to add an Edit button. start several petitions, I will sign them all.

Moving on to ‘least like’ character: Photoshoot Richard. I’m not saying Richard never smolders in his everyday life, I’m sure he does in certain circumstances

but generally speaking, I think Photoshoot Richard is much too confident.

I’m glad he’s not as confident though because that is part of his appeal, regardless of all that stuff I just said about Twitter…

So yeah, I have conflicting feelings. Richard does that to me. I like that he does that to me- I can’t really explain why that is. I do know that he makes me feel, and he makes me think, and that’s why I keep coming back for more.

I have struggled in vain and I can bear it no longer. These past months have been a torment. ~Mr. Darcy, Pride and Prejudice

Hi! *waves* long time no see. it’s been awhile since I’ve blogged but I’m still wandering around the fandom.

A few days ago I saw a retweet of a new fanvid by Girl of Gisborne. I clicked on it because it was described as a “crack” video, and I was curious to see if it could make me laugh. it did, I loved it! it felt so good to laugh at something fandom related again.

Even though I had recently unfollowed Richard on Twitter

I found myself still following the drama surrounding his newfound voice, and I saw him say:

did Richard just….stand his ground?!

he soon removed the tweet but that didn’t matter to me this time because that phrase, ‘feel free not to follow‘, got stuck on a loop inside my head. like it was supposed to mean something to me, something important. hmm.

After months of RA related silence on Twitter, I made a tweet about him (give me a new photoshoot, Richard, and I will tweet your pretty face more often. just sayin’.)

when someone replied that it was good to see I still liked Richard. it brought to my mind his words describing love. Richard makes me feel all of those things sometimes, with his words and his actions. and that’s okay. 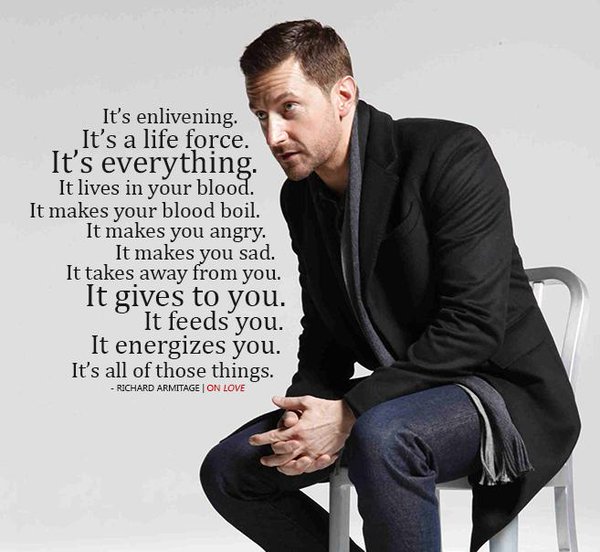 My 3 year blogging anniversary was in May. on that day I found myself reflecting back on some of the things I had learned throughout my RA fangirling/blogging experience. I didn’t make a post that day but I did save the list I had made:

I added that last line just yesterday, because I finally realized why Richard’s tweet was on repeat inside my head. Feel Free. free to do my thing and free for Richard to do his.

…and the record stopped skipping.

I was just going on a little stroll to...nowhere in particular.